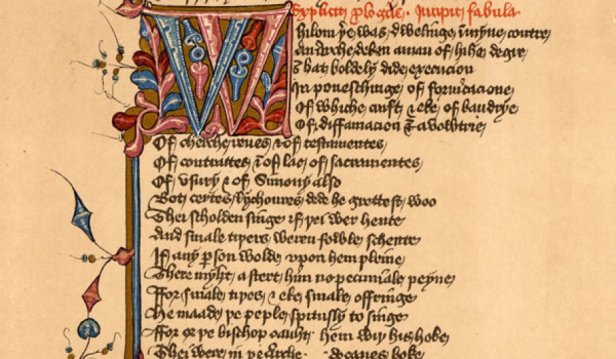 “The might of the Father of the Heavens The Wisdome of the Glorious Son, And the goodnesse of the Holy Ghost three persons and one God be with vs now and ever Amen.

“Good Bretheren and Fellows our purpose is to shew you how and in what manner this Noble and Worthy Craft of Masonry was first founded and begun, And afterwards how it was confirmed by worthy Kings and Princes and by many other Worshipfull men, And also to all those the be heere, Weeminde to shewe you the Charge that belongs to every trew Mason to keep, for in good Faith if you take good heed it is well worthy to be kept for A worthy Craft and curious Science. Srs there be Seaven Liberall Sciencies of which the Noble Craft of Masonry is one, And the Seaven be these, The first is Gramer and that teacheth A man to Spell and Write trewly. The second is Rethorick and that teacheth A man to speake faire and Subtill, The third is Lodgick and that teacheth A man deserne the trew from the false, The ffowrth is Arethmatick and that teacheth A man to Reckon and Account all manner of Accompts, the fifth is Geometry and that teacheth A man  and Measur of Earth and of all things of the which this Science is called Geometry, The sixth is called Musick, and that teacheth A man to sing with Voyce and Tongue and Organ Harp and Trump, The Seaventh is called Astronemy and that teacheth A man to know the Course of the Sunn and the Moone and the Starrs, these be the Seaven Liberall Sciencies of the which all be founded by one which is Geometry, and thus a man, may prove that all the Seaven Sciencies be founde by Geometrie for it Teacheth A man     and Measure Ponderation weight on all things on Earth, For there is noe Workman that Worketh any Craft but he worketh by some Mett or Measure. And every man that buyeth or Selleth they buy or Sell by some weight or Measure, And all this is Geometry, And the Merchants and all other Craftsmen of the Seaven Sciencies, and the Plowmen and Tillers of the Earth and Sowers of all manner of Graines Seeds and Vine plants, and Setters of all manner of ffruits: For Gramer or Arethmatick nor Astronomy nor none of all the Seaven Sciencies can no man finde Mett or Measure in without Geometry wherefore methinks that the said Science of Geometry is most worthy. And all the other be founded by it. But how this worthy Science and Craft was first founded and begun I shall tell you before Noyes fflood there was A man which was called Lameth as it is written in the Bible in the 4th Chapter of Genesis, and this Lameth had 2 Wifes the one called Ada the other Sella, by the first wife Ada he begat a Sonne and a Daughter And these 4 Children found the begining of all these Crafts and Sciencies in the World flfor the Eldest Sonne Gabell found the Craft of Geometry and he fed fflocks of Sheep and Lambs in the ffeild: And first wrought houses of Stone and he and his Brother Tuball found the Crafts of Musick song of mouth harp and Organs and all other Instruments. The third Brother Tubalican found the Smith Craft of Gold and Silver Iron and Copper and Steel, And the Daughter found the Craft of Webbing and these Children knew well that God would take vengeance for Sinn either by ffire or Water, wherefore they wrought the Scyences they had founded in 2 Pillers of Stone, that they might be found afterwards, and the one Stone was called Marble for that would not burne in the ffire, and the other Stone was called Latherne and that would not be drowned with water; Our Intent is to tell you how and in what manner these Stones were found that these Sciencies was written on the Herminerus that was Cubb his Sonne, The which Cubb. Semet. Sonne the which Sonne was Noaths Sonne this same Herminerus was afterwards called Armes the ffather of the Wisemen he found one of the 2 pillers of Stone and found the Science written therein and he taught it to others, And at the makeing of the tower of Babilon, was Masonrie first made there much of, and the King of Babilon called Nemroth who was a Mason himselfe and loved well the rest as is said with the Masters of Stories, And when the City of Ninevey or the City of the East Port should have bin made Nemroth the King of Babilon sent thither Sixty Masons of his Region to the King of Ninevey his cozen, And when he sent them forth he gave them a Charge in this manner.

“The First Charge is that you shall be true to God and holy Church and to vse noe Error or Heresie you vnderstanding and by wise mens teaching, also that you shall be Leige men to the King of England without Treason or any ffalshood and that you know noe Treason or treachery but that ye amend and give knowledge there of to the King or his Councell also that ye shall be true to one another (that is to say) every Mason of the Craft that is Mason allowed you shall doe to him as you would be done to yor selfe.

“Secondly and ye shall keep truely all the Councell of the Lodge or of the Chamber, and all the Councell of the Lodge that ought to be kept by the way of Masonhood also that you be noe theefe nor theeves to yor knowledge free that you shall be true to the King Lord or Master that you serve and truly to see and worke for his advantage also you shall call all Masons yor ffellows or yor Brethren and noe other names:

“Fowerthly also you shall not take yor ffellows wife in Villoney nor deflowre his Daughter or Servant nor put him to disworship also you shall truely pay for yor meat or drinke wheresoever you goe to Table or Board whereby the Craft or Science may be slandered. These be the charges Generall that belong to every true Masons both Masters and Fellows.

“Now I will rehearse other Charges single for Masons Allowed.

“First that noe Mason take on him noe Lords worke nor other mans but if he know himselfe well able to pforme the work soe that the Craft have noe Slander.

“Secondly also that noe Master take worke but that he take reasonable pay for it, soe that the Lord may be truely served and the Master to live honestly and to pay his ffellows truely also that no Master or ffellow suplant others of their worke (that is to say) if he have taken a worke or else stand Master of a worke that he shall not put him out without he be vnable of Cunninge to make an end of his Worke, alsoe that noe Master nor ffellow shall take noe Prentice for lesse than Seaven yeares and that the prentice be able of Birth that is ffree borne and of Limbs whole as a Man ought to be and that noe Mason or ffellow take no allowance to be maid Mason without the Assent of his ffellows at the least Six or Seaven, that he that he maide be able in all degrees that is free borne and of a good Kindred true and no bondsman and that he have his right Limbes as a man ought to have.

“Thirdly also that a Master take noe Prentice without he have Occupcon sufficient to Occupie two or three Fellows at least.

“Fowerthly also that noe Master or ffellow put away Lords worke to Taske that ought to be Journey worke.

“Fiftly also that every Master give pay to his ffellows and Servants as they may deserve so that he be not defamed with false working.

“Sixthly also that none Slander another behind his back to make him loose his good name.

“Seventhly that noe ffellow in the house or abroad answere another Vngodly or repravably without cause.

“Eightley also that every Master Mason reverence his elder also that a Mason be no Common player at the Dice Cards or hazard nor at any other Vnlawful playes through the which the Science and craft may be dishonerd.

“Ninethly also that noe Mason vse no Lechery nor have been abroad whereby the Craft may be dishonored or Slandered.

“Tenthly also that no ffellow goe into the Towne by night except he have a ffellow with him who may beare record that he was in an honest place.

“Twelthly also that every Master Mason and ffellow that have trespass’d against the Craft shall stand in Correcon of other Masters and ffellows to make hin accord and if they cannot accord to goe to the Comon Law.

“Thirteenthly also that a Master or ffellow make not a Moulde Stone Square nor rule to no Lowen nor Sett no Lowen worke within the Lodge nor without to no Mould Stone.

“Fourteenthly also that every Mason receive or cherish Strange Fellows when they come over the Countrey and sett them on work if they will worke as the Manner is (that is to say) if the Mason have any Moulde Stone in his place on worke and if he have none the Mason shall refresh him with money vnto the next Lodge.

“Fifteenthly also that every Mason shall truely serve his Master ffor his pay.

“Sixteenthly also that every Master shall truly make an end of his worke taske or Journey whethersoe it bee.

“These be all the Charges and Covenants that ought to be had read at the makeing of a Mason or Masons.

“The Almighty God who have you & me in his keeping Amen.”

(A certified Transcript from the British Museum.)